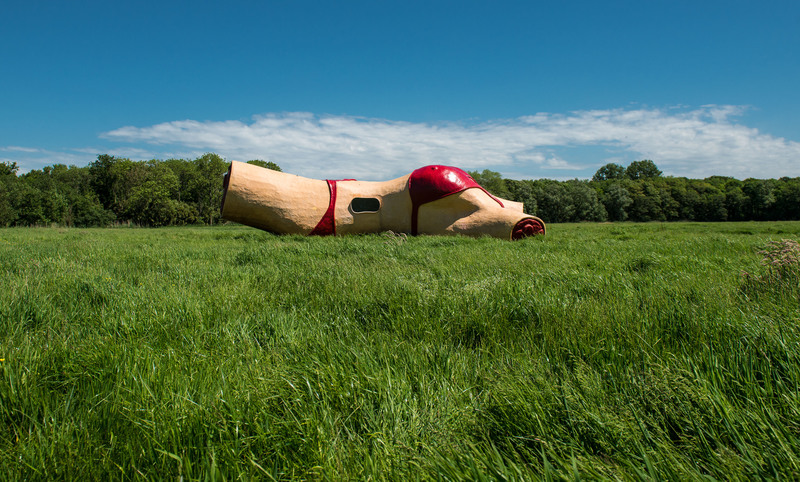 Stripping life down to its bare essentials

The Keukenhof is under siege. Across the road from the world famous flower park, both tourist magnet and symbol of bourgeois dowdiness, two men are loading a howitzer. There’s no mistaking the trajectory of this Big Bertha—the nearby sea of tulips is going to get blown to smithereens. The men are faceless and featureless, like anonymous puppets blindly following orders, ready to become cannon fodder themselves. They are very basic archetypes, just like the hut sitting on the lawn a few hundred meters away is little more than the idea of habitation, and the giant vice and steam hammer are symbols of the cottage industry underlying the economy the gunners are defending. Welcome to Vrijstaat (Freestate).

With more than thirty mostly very large sculptures Vrijstaat is one of the most elaborate Atelier Van Lieshout exhibitions in recent years. The works stand scattered across the wooded estate, with two large installations in former cow sheds and the brutal Bikinibar—a day-center for retired people in the form of a giant female torso with severed limbs and head—so close to the railway track that several train drivers have already alarmed their superiors days before the opening. Vrijstaat is invasion, revolution, occupation. The otherwise posh Kasteel Keukenhof, coveted wedding location for the well-to-do, has been turned into a breakaway miniature state where survival of the fittest is the number one rule and strangers are distrusted and kept at bay with fire power.

Autarchy, DIY, and a radical back-to-basics attitude have always been the main ingredients of Joep van Lieshout’s work. His art sits somewhere between autonomous sculpture and design. Most works are functional, lack decorative elements, crudely shaped, and have been executed in dull monochrome polyester. Still, they are immediately recognizable as AVL. This transcendence of individuality is even applied to Van Lieshout himself. Since 1995 he has produced his work under the name Atelier Van Lieshout (AVL). The artist has become brand. 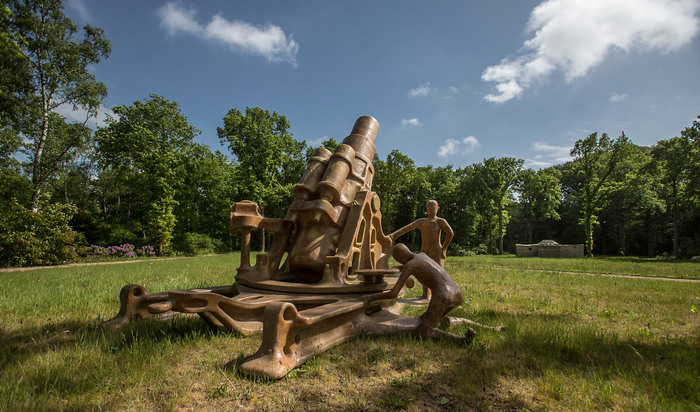 AVL produces the furnishing for a Mad Max-like, post-apocalyptic society in which supermarkets, banks, restaurants, policemen, and beauticians do not exist anymore. Some works still echo the old, lost world—like Alfa Alfa, a car transformed into a chicken coop. The elegance of Italian engineering and the promise of speed have effectively been subjugated to the needs of poultry farming. More often Van Lieshout uses his trademark polyester to create bold and primitive forms for his settlement of Freebooters. His Workshop for Weapons and Bombs consists of a rusty shipping container paired with a large round gas tank. The nearby Soap Factory, a sturdy little hut with a number of fireplaces, almost feels cozy. And the snow-white Wellness Skull, containing a bath and sauna, radiates in the sunlight.

The Wellness Skull combines the classic memento mori symbol of the skull with a critique of the wellness industry selling us the idea of eternal youth. It’s one of the few works that refers to topicality. Typically, AVL’s work functions within the AVL universe and is first and foremost about the nature of functionality. Here, man is little more than an animal with tools. Life is stripped down to its bare essentials: eating, sleeping, fucking, and shitting. It’s direct, it’s literal, it’s physical. The series of organs placed along a path through the woods—brownish purple intestines, a liver with red, blue and green arteries, black lungs, a kidney and bladder—can be seen as emblems of this less complicated, more honest way of living.

But AVL’s work is not about a clean and optimistic utopia. It also brings to mind para-military clans and groups of heavily armed zealots, isolating themselves in the American outback preparing to wage war on the government. Surely AVL presents the dark side of the slow food movement and back to nature philosophies. It shows how easily a Walden can turn into a fascist nightmare.

The installation Slave City, made between 2005 and 2009 and presented in Museum Boijmans Van Beuningen in 2009, is Van Lieshout’s ultimate model of dystopia. In this “brave new world” humans are reduced to production factors, kept docile with food, alcohol, TV, and sex, and no resources are lost because of an elaborate closed recycling system. At Keukenhof the related Technocrat, an impressive installation of tanks and containers for the processing of foodstuffs and fuel, is shown in a shed still smelling of cows milked there less than nine months ago. Next door, Cradle to Cradle really brings home the horror. It’s part operation theater, part slaughterhouse. Bodies have been cut in half, intestines collected in bowls, arms and legs stuffed into a giant meat grinder. 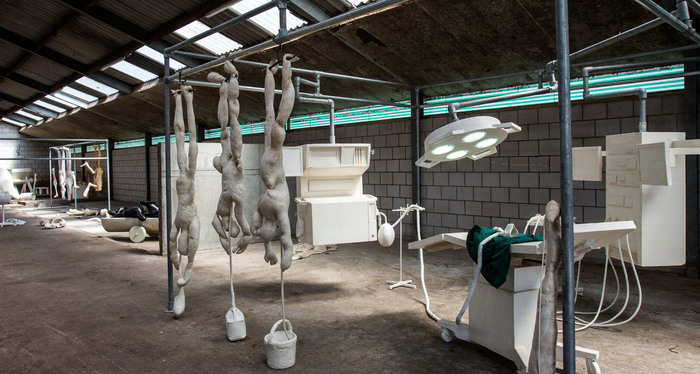 Joep van Lieshout being probably the best-known sculptor in The Netherlands; his work has been shown extensively. Vrijstaat is extraordinary in size, however. And unlike Infernopolis, the large 2010 exhibition at the Onderzeebootloods in Rotterdam, this show is much more than a couple of clusters of work. Vrijstaat really has consistency and unity, with Technocrat and Cradle to Cradle tying everything together. But the absolute best thing about this exhibition is the location. Amongst the lush and lovely vegetation AVL’s sculptures are charged with an unsettling quality which would be much more subdued or even neutralized in a white cube. It feels like they have found their natural habitat. And the result is scary and fascinating at the same time.