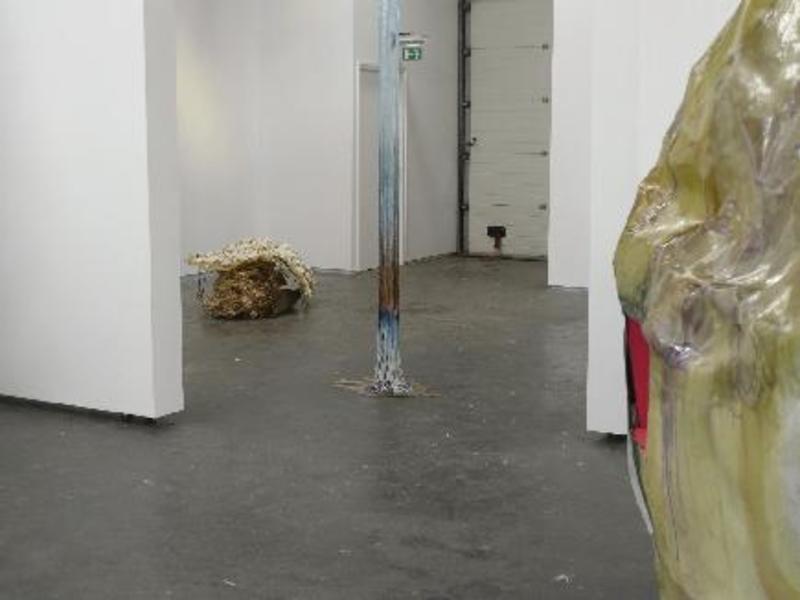 David Lindberg has been living and working in Amsterdam Noord for many years now, and his solo show at Nieuw Dakota – which includes works dating back as far as 1993 – celebrates this long-lasting relationship. The exhibition features a variety of sculptures, ranging from site-specific installations to more bi-dimensional works.

Lindberg's research is all about the materials, with an abundant use of epoxy resin in which he wraps everything – from plastic scraps to newspapers and food. He uses it to build strange compositions where bread loafs form precarious airship-like structures, or ordinary objects assemble in random configurations that hang from the ceiling or a wall. There is even an architectural construction in the middle of the gallery, in which a video installation is also wrapped in the same substance. 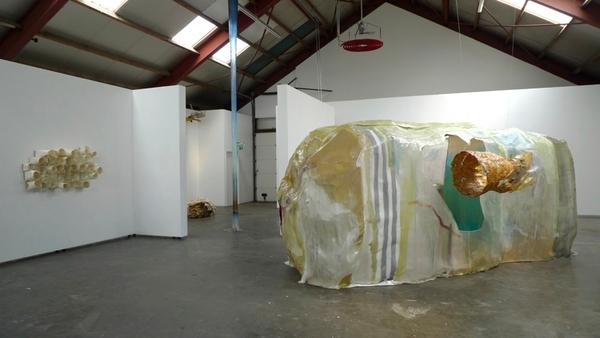 Other works have a more painterly quality to them, despite technically being the result of similar sculptural processes. Some of them focus on layers, suggesting the somewhat more romantic role of epoxy as a sort of eternal prison of amber; others create patterns by dripping, turning the laws of physics into a tool for abstraction. 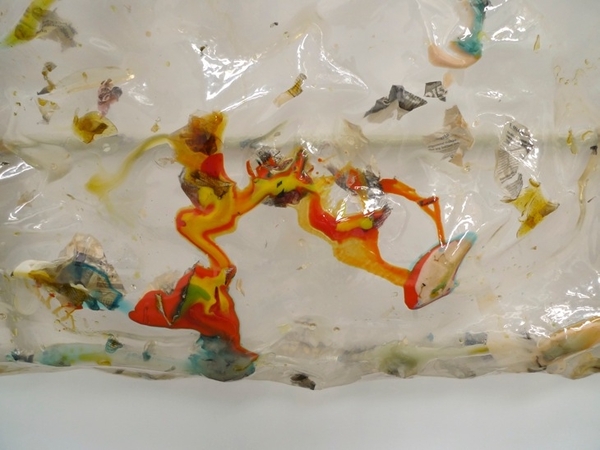 While I could appreciate the craftiness, I nevertheless had a big problem connecting with the pieces on show. There is definitely some kind of irony in some of the more “pop” sculptures – e.g. the one with the Burger King logo – but the rest of the assemblages felt pretty random, and not in a beautiful way. I'm not saying an artist should stand by a certain rhetoric by any means necessary, but the use of a particular material is not a strong enough statement for me to plug into someone's discourse. I'm prone to condone most of those types of art that make the infamous “I don't get it” echo in your mind, and definitely I'm not one of those divining gallery goers who just has to “feel it.” Nonetheless, while I can enjoy John Bock's silliness because there is a beauty to it, Lindberg's creations left me quite cold and perplexed. The feeling I had was that his objects are too bold to be marginal, and too purposeless to be monumental.

Posted by Nicola Bozzi on 7/25/11
Tags: epoxy mixed-media installation video-art
RELATED ARTICLES
COMMENTS (0)
ArtSlant has shutdown. The website is currently running in a view-only mode to allow archiving of the content.