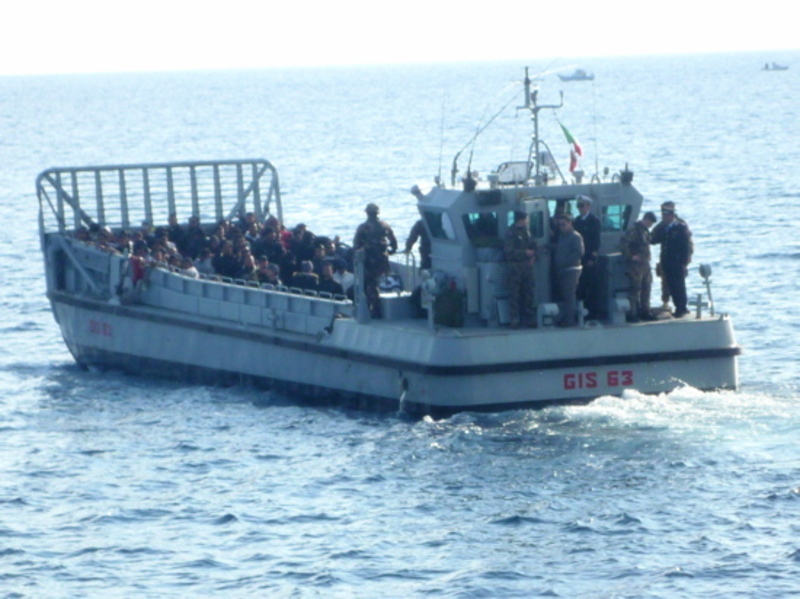 Let me be honest. I visited Lucy Wood’s “Vicini Lontani/Distant Neighbors” at Upstream Gallery with a lot of academic baggage. I’m a visual anthropologist by training and I spent much of my time in grad school arguing for the anthropological usefulness of art. In an apologetic academic landscape where models demanding reflexivity and transparency try to address the “burden of representation”, I argued that artistic methods could add something to the conversation that writing could not. Given my background, perhaps you can see that I had big and possibly unfair hopes for Distant Neighbors.

Distant Neighbors is a suspiciously timely exhibition not so much systematically chronicling, but selectively documenting the phenomenon of African migrants traveling to Europe, namely those landing on the small Italian island of Lampedusa following an arduous journey at sea. Though Wood’s fieldwork took place over the past couple years, it could not be more relevant than it is in this moment following the Arab Spring and the widespread (not to mention politically contentious) migrations coming from North Africa. It is reckoned that more than 35,000 African immigrants have reached Lampedusa and islands like it so far this year. 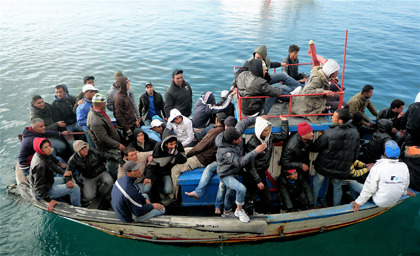 From both an artistic and anthropological point of view, much of the exhibition feels like raw data, as if Wood is presenting her findings, but hasn’t begun the grueling stage of analysis. The show oscillates between factual data and hints of political, cultural, and artistic analysis, with the moments of greatest clarity coming from the works that least resemble straightforward documentation.

Amidst haphazardly arranged artifacts and souvenirs of Wood’s field visits sit four video monitors. The videos present loosely edited interviews that offer mainly a superficial introduction to the plights of various stakeholders involved (the coast guard, fishermen, Lampedusans, and the migrants themselves). They do not provide an enlightening perspective onto the geopolitical origins of the migrations or delve deeply into their political implications or after effects. I left aware that the locals have various opinions about the migrations (some are proud of their role in saving lives; others are concerned about the economic impact of the new arrivals). At best we get a nebulous picture of the situation, touching upon a general desperation that pushes people to leave their homes, only to encounter further uncertainties. Wood’s portrayal of entrapment extends from the practices of cruel human traffickers, to the Catch-22 of Lampedusan fishmen left with a choice between saving lives at sea and being prosecuted for people smuggling, and further on to the North African migrants who find themselves trapped on an unfamiliar island. (Many immigrants do not even realize they are on an island and expect to hop a train to reunite with their relatives and loved ones in other parts of Europe). 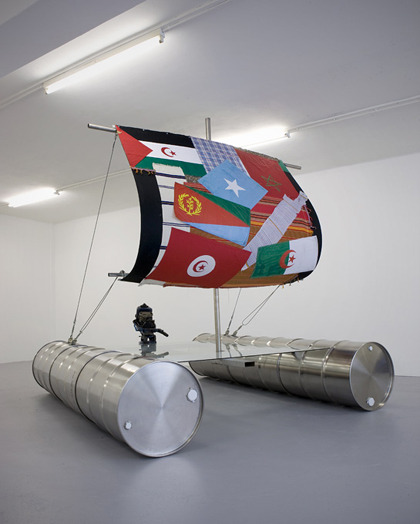 There is indeed a sense of hopelessness and confusion, of large scale, political and economic entrapment. As you stand in the middle of the room the voices from the monitors surround you in conflicting points of view. The chaotic arrangement of artifacts (food wrappers, life buoys, personal effects) recalls the messy backroom of a museum archive whose contents await classification, and seems to allude to the sudden desperation of the work’s migrant subjects. This is what Wood does best: she suggests the uncertainty, the unsustainability and the liminal state that these migrants experience. The exhibition’s centerpiece, a patchwork catamaran, is a modern day Raft of the Medusa that might share a mooring with Renzo Martens’ Enjoy Poverty raft. Its glass deck is held afloat by oil drums and it catches wind on a sail of quilted North African flags and cloth. While the symbolism is not hard to read, this one work says as much about the given situation as any of the video interviews. Coupled with a series of related two-dimensional works, it speaks of anxiety, economic exploitation, hardship and strangled promise. 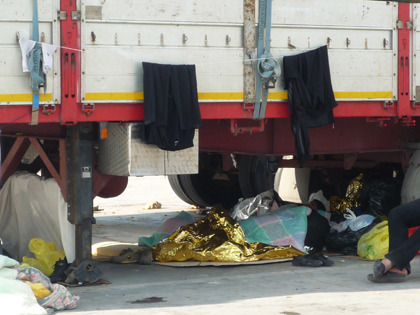 I enjoyed the exhibition, but at times I wanted her to take the work further in either direction – to give additional information (a portfolio of accompanying photographs was quite welcome on this front), or to eschew specifics altogether for a more subjective, experiential, even synaesthetic approach. How does it feel to be in this tenuous situation, unwittingly trapped? How and why does one make a choice to leap from a frying pan into a fire? Wood often charters a middle road between these points of data and emotional experience. But where it succeeds – specifically with the raft – the work suggests possibilities about art as it relates to representation, empathy, activism, and even its interdisciplinary relevance in the social sciences.

~Andrea Alessi, a writer living in the Netherlands