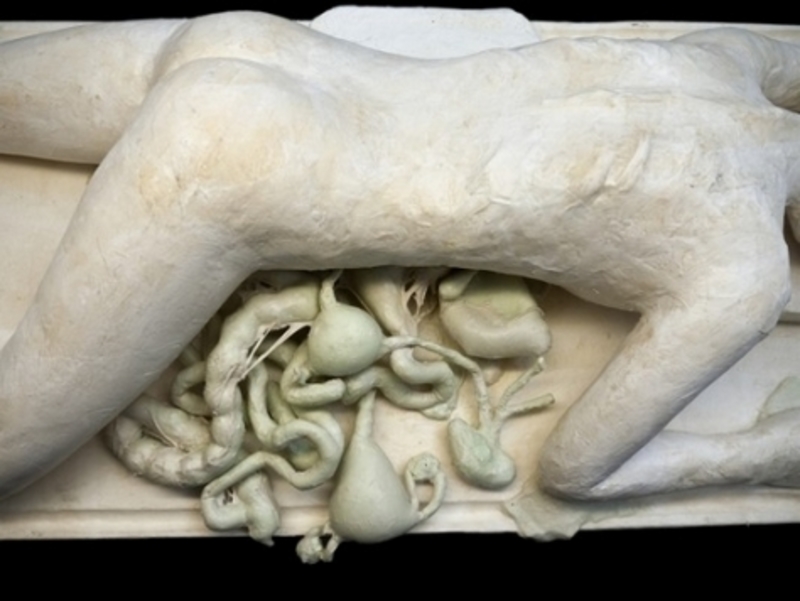 “Infernopolis” is an apt name for an exhibition of work from Atelier Van Lieshout (AVL), the Rotterdam-based studio and team of Dutch artist Joep Van Lieshout. It inaugurates a five-year partnership between Museum Boijmans Van Beuningen and Rotterdam’s repurposed Submarine Wharf, presenting a sort of dystopian city populated by man-as-machine sculptures, blending the organic and grotesque with the sleek and mechanical. It is equal parts The Matrix and Soylent Green with subverted Buckminster Fuller idealism. Its multiple sections can be viewed as large-scale models for AVL’s gruesome, and no doubt satirical, thought experiments in architecture, sustainability, and urban planning. Add a dose of Louis Bourgeois corporeality to Paul McCarthy sensationalism and you get an idea of what the exhibition looks like.

The organic body of work represents a holistic approach to art and life. Little distinction is made between design, architecture, and sculpture in AVL’s total environments. Yet AVL’s holism is not so much new-age-y as it is dark, sardonic even. Everything leads back to an almost paranoid concern with resource management and overpopulation. But instead of freaking out, AVL seems to say: “The sky is falling! Cool. What’s gonna happen next?”

If bodies are mechanical and machines corporal, then people, or forms resembling them, are the raw materials of AVL’s Malthusian nightmares. Words like “recycling” and “organic” conjure up feel-good images of responsible living. In “Infernopolis” however, they evoke a hellish techno-ecology in which the body is used not for labor, but fecal-recycling, organ transplants, and even food material.

Two sections of the exhibition function as self-sustaining models of material philosophy, reducing the body grotesque to its primal needs at the expense of its desires. AVL’s scatological project The Technocrat is a tremendous work following the notion of boozed-up human participants (one thousand to be exact) sustained by energy (and thus food) produced from their own excrement. Many of the work’s industrial elements address the creation and processing of said excrement. AVL’s other model society here, Cradle to Cradle, is essentially an operating room and slaughterhouse littered with body parts. Some will be used for organ transplants, others as meat. Still other bits will be converted into energy. In this zero-sum model, waste is food, and as material resources are depleted worldwide, the body itself becomes renewable material.

For AVL bodies and machines are interrelated, but their physical treatment is different. Some human forms are curvy and abstracted, like blowup dolls. Others are craggy and shriveled, and still others demonstrate AVL’s prodigious sculptural ability with anatomically specific bones and organs. Throughout “Infernopolis”, the sleek lines of cutting tables, beds, sinks, and feeding troughs provide welcome textural variation.

Lest you think you’re in for a distressing and didactic experience, the exhibition is not entirely consumed by dystopian ventures, though shock-value plays a continual role throughout. One “room” of the warehouse is dedicated to AVL’s furniture and mobile environments, centering, of course, on the body and reproduction. It is populated with pop-y fiberglass organs and stick figures, carnal and uninviting chaise-lounges, and caravan-like installations. The latter sculptures-as-environments such as Darwin (a room shaped like a giant sperm) and Bar Rectum (the form of this walk-in bar should be self-explanatory) are perhaps AVL’s best-known works. In any other context they would shock, but in the Submarine Wharf these surprising spaces are almost tame, providing comic relief from The Technocrat and Cradle to Cradle. The anatomical Wombhouse is based on the prefabricated technical core of a home, including essential elements such as heating, plumbing, and electrical systems. The central bedroom is a bit obvious, but the notion of womb as functional readymade home (with ovaries operating as a toilet and a minibar) is good fun nonetheless.

There are many holes in Van Lieshout’s philosophies, especially with their appeals to alchemy and pseudo-science, but one gets the sense that AVL’s dysfunctional cities are proposed with a boyish grin and a knowing wink. The relationships between resource depletion, war, and society are indeed important concerns, though these projects seemingly take them to illogical and paranoid conclusions, with technology being used not for good, but for amoral survival. Though some works might appear preachy, Van Lieshout has said “art should be non moralistic” and “free”, so perhaps we are left to read into his sensational proposals what we will.

The exhibition is picture-worthy at all turns, beginning with the Aqualiner ferry ride along the Nieuwe Maas, flanked by Rotterdam’s industrial ports on one side and warehouses-turned-condos on the other. The interwar building complex on the RDM Submarine Wharf comprises giant warehouses layered in peeling paint. The exhibition space itself is similar in size to the Tate Modern’s Turbine Hall, and the choice of Atelier Van Lieshout for the first of five annual exhibitions was particularly inspired. Only an artist working on such a large scale could make work that isn’t overwhelmed by, or competing with such a vast space. Indeed, AVL’s installations look right at home, but also a bit naughty, like anarchic squatters surreptitiously colonizing the pier. After such an impressive, disturbing, and entertaining first showing one wonders and anticipates what will fill the space next.

~Andrea Alessi, a writer living in The Netherlands