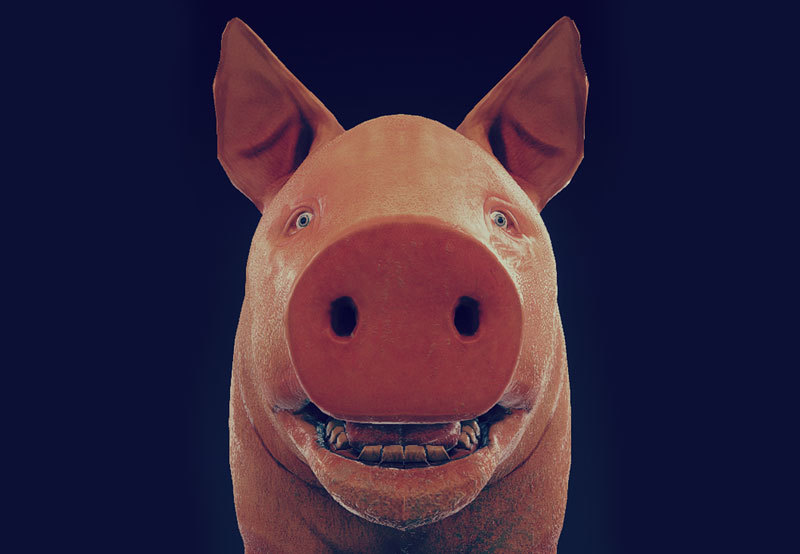 Virtual Embodiment: Beyond the Death of Pig

The annual Berlin festival transmediale engages the crossroads of art, media, and technology. This year’s edition, given the title conversationpiece, was held at the Haus der Kulturen der Welt from February 3–7, with diverse events and artworks organized in four streams: Anxious to Act, Anxious to Share, Anxious to Make, and Anxious to Secure. On the morning of the final day, I entered the cafe stage area to find a computer monitor displaying a scene from the vantage point of a pig entering a slaughterhouse. I was looking at Pig Simulator, a virtual reality video game played from the perspective of a pig entering porkhood. The game, yet to be released, was a part of the festival’s The Mess with Tech, Sense and Thinking hybrid event.

Watching the brief and seemingly banal storyline of “the last moments of the pigs while they are transported to a slaughterhouse and then further processed into the end product,” I was immediately intrigued. What was the process of getting to the end product (human waste?) and who were the pigs? I felt relief and excitement that the programmer hadn’t yet closed down when I returned to the space after attending my pre-scheduled academic events. The programmer, Stephan Isermann, Creative Director of the advertising studio FLATMADE, strapped headphones and a bulky chunk of headgear to me. I have since learned that this was the famous Oculus Rift, the virtual reality head-mounted display purchased by Facebook and set to be released as a consumer product this March. Isermann handed me a controller of the style I forever associate with N64 and sibling-hangs in the playroom circa 1997. It afforded four functions: walk, rotate, sniff, and grunty-oink.

Once the game commenced, I became a userpig. My newly embodied pighood was most immediately indicated by a snout viewed from above, what felt like was a reasonable distance for eye-to-snout proportions. I was positioned behind a few others, large and pink and chunky. I grunted and sniffed and looked around to check out my surroundings. I never made eye contact with the other pigs and was mostly only able to observe their bodies, but not their heads face-on. I was able to see sterile factory workers as they walked and worked on the assembly line. Their bodies and movements blended with the factory’s—I couldn’t separate them from the environment. Their movements lacked gesture and I couldn’t tell exactly what they did. There was no felt exchange of energies, no comprehendible touch, between my pig body and their structure, nor the machines really. Once slung onto the hooks, prior to slicing (I am not sure which part of me was sliced actually, but I did see my blood squirting out below me, as well as out of the pigs hanging ahead of me and behind me), I lost my sniffing and oinking functions, a timing I felt to be a bit premature. 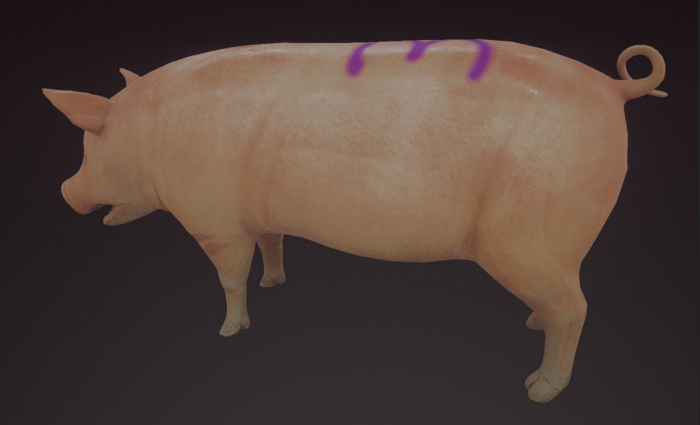 The game shifted to its final scene, in which I was dangling above a shelf in a refrigerated aisle at the factory between other hanging and encased pork. After a moment further, taking full advantage of my only remaining function, rotation, I realized I wasn’t dangling. When I looked down, I did not see any encasement but only the shelf below. I seemed to be more of a ghostly, post-pork presence, the reality between other material realities, an ongoingness, defined by the objects surrounding me that continued to have an immediately intelligible form and animation. I tried to observe my reactions to this: I, user, who once privileged the vantage point of a living-to-slaughtered pig body, was now at a site between amalgamations, between the material and energies that transformed my own and fellow pig bodies into pork. I remembered the transport vehicle through factory process vividly and tried to understand my desperate desire and sense of entitlement to be afforded my own materiality.

I was nothing I could define yet very much present: in realit(ies), or among realities, or across realities? I realized the game allowed me to play not pig, or simulated pig, but specifically userpig, with its own unique narrative of an unknown embodiment and ongoing “end.” Was this the goal of the game: to provoke the attempt to understand this foreign site? I understood that I still had some autonomy by my retained rotation function. From this function I could define my location and see the nothingness I had become, somewhere within the virtual reality and initial reality at the festival.

It took a while for me to accept that my session in virtual reality had reached its end point; it really only ended because I knew I was being waited on in my initial reality. The game’s lack of completion invoked what new materialist Karen Barad calls intra-activity: the theory that all entities—bodies, beings, materials, and occurrences—are the perpetual manifestation of emerging agencies. “Embodiment,” writes Barad, “is not a matter of being specifically situated in the world, but rather of being of the world in its dynamic specificity.” [1] The user starts as pig but ends somewhere between the material product and operational processing of its storyline's character; the user as userpig occupies no subjecthood but a site of embodied objecthood as game subject. As such, the Pig Simulator becomes a site for post-human embodiment in and through usership within a storyline of operations: this was the most pointed planetary-scale gesture I encountered at Transmediale.

I am still unsure if Pig Simulator is a foreshadowing of a (present?) dystopia, or a forewarning, or a site to become aware of. The effect of “winning” the game in the ongoing becoming of userpig has remained with me this past week. To return to Barad, it marked an opening for “ethical questions […] not only about how nonhuman animals [and all people and entities not recognized as such, and the planet] are being appropriated for human desires but also how our desires and our beings are co-constitutively reconfigured as well.” I wonder if I may ever escape my desperate subject-reaction of wanting to be noticed by just one of those empty-metal-cart-pushing, sterile-blue-gloved, white-suited factory workers conveyor-belting through those hanging plastic door separators of the refrigerator aisle. Can I escape this desire to return to a familiar materiality? Can I unpeel this imprint of human needing? 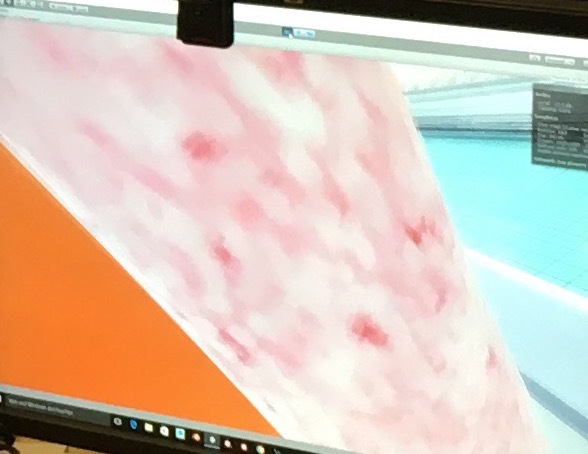 Posted by Genevieve Costello on 2/11/16
RELATED ARTICLES
COMMENTS (0)
ArtSlant has shutdown. The website is currently running in a view-only mode to allow archiving of the content.