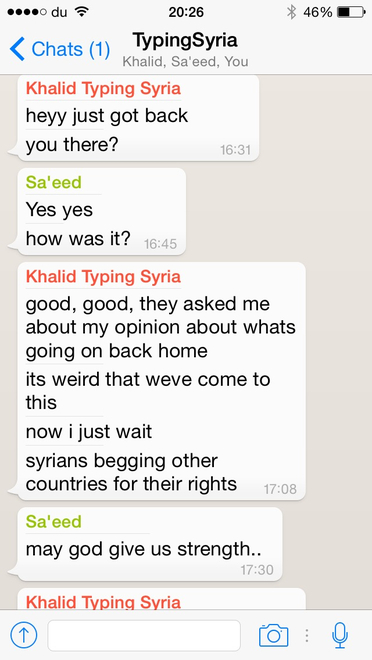 Typing Syria is a social experiment and performance piece running in a Whatsapp group through the month of April. Subscribers are not allowed to engage with the characters, and are encouraged to eavesdrop but not act. This voyeuristic relationship echoes the international community’s attitude to the Syrian situation four years on, which can be likened to the screen saver that comes onto the iPhone after 30 seconds of inattention. 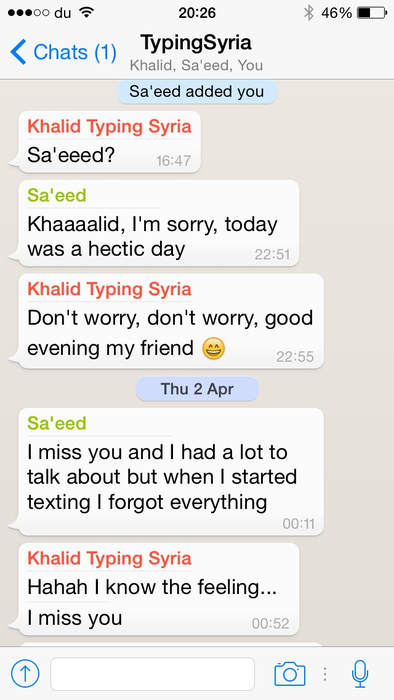 Throughout the performance, two old friends, fictional characters named Khalid and Sa’eed, separated by borders and time zones, type onto Whatsapp, trying to connect through limited words and an increasing divergence of daily lives. Just like any other young, unmarried guys, there is light discussion of beers and girls (perhaps in subtle reference to the largely secular nature of urban Syria before the conflict began). However, it becomes evident very quickly that Sa’eed is in Syria and Khalid is pursuing asylum in Holland. There are moments of universal relatable humanity, such as when Sa’eed’s female relatives bake pastries. These vignettes are interrupted by reality—the power goes out and the pastries cannot be cooked. 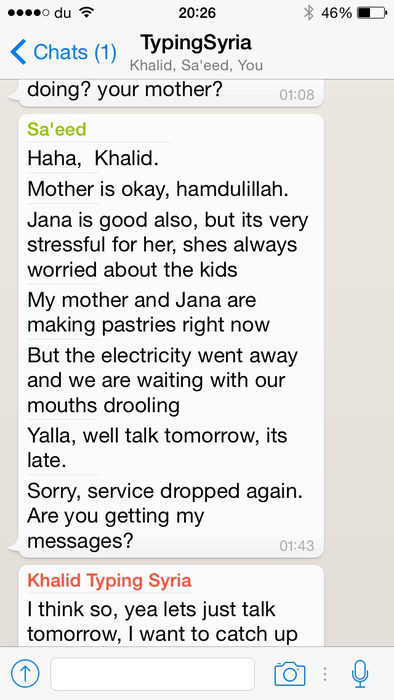 It’s oddly (and perhaps deliberately) unclear on which “side” of the conflict the characters sit. Khalid is rejected for an asylum visa in Holland. He wonders aloud, “its weird that weve come to this. Now I just wait. Syrians begging other countries for their rights.”  Sa’eed tries to connect Khalid with friends in Italy, but refuses to leave Syria because he is in love with a girl whose “brain is a real machine” who used to wear the veil but recently removed it but has a brother who is “2/3 ISIS.” 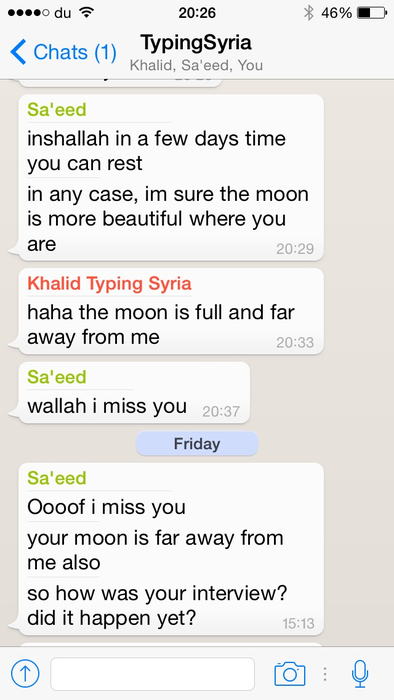 When Sa’eed types that he wants to secretly live with this woman—a scenario that is implausible for a Syrian context before or after the conflict—the “performance” began to feel like an awareness campaign geared towards a Western audience that should have been titled, “Syrians: They’re Just Like Us.” The reality is that Syrians are diverse in belief and culture, as well as stories of survival, and by trying too hard to demonstrate that the characters are educated, secular, and hip, the artists risk viewers generalizing about an entire population. At a time when many people inside (and even outside) Syria do not even have access to basic food, water, and power, it is dangerous to focus exclusively on two relatively affluent, English-speaking characters. Perhaps this will be un-packed in further texts throughout the month. Nonetheless, the performance does a decent job of weighing the tensions between disconnection and connection, exile and domesticity, while probing the ways that today’s conflicts are mediated by social media. 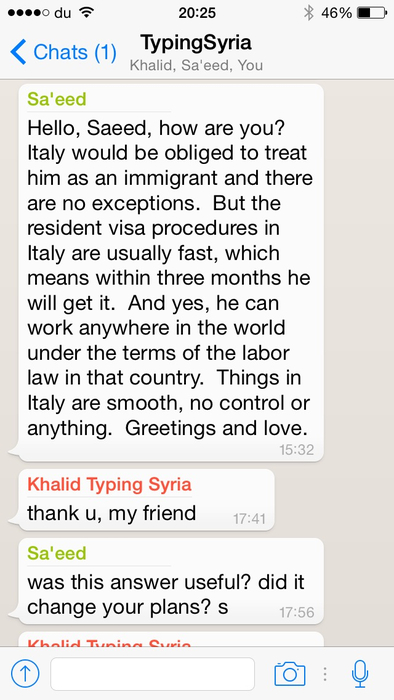 It is unclear why the artist or artists’ names associated with Typing Syria have not been mentioned, although a press release did mention support from NYU Abu Dhabi, and as the characters’ numbers are a +971 country code, it seems the project originates in the United Arab Emirates.  Unless screenshots go viral later this month, it is doubtful that this performance will change the international community’s lack of response to the situation in Syria in any significant way. Will we all continue to look on with passive interest before scrolling through our social media feeds?

(All images: screenshots from Typing Syria)