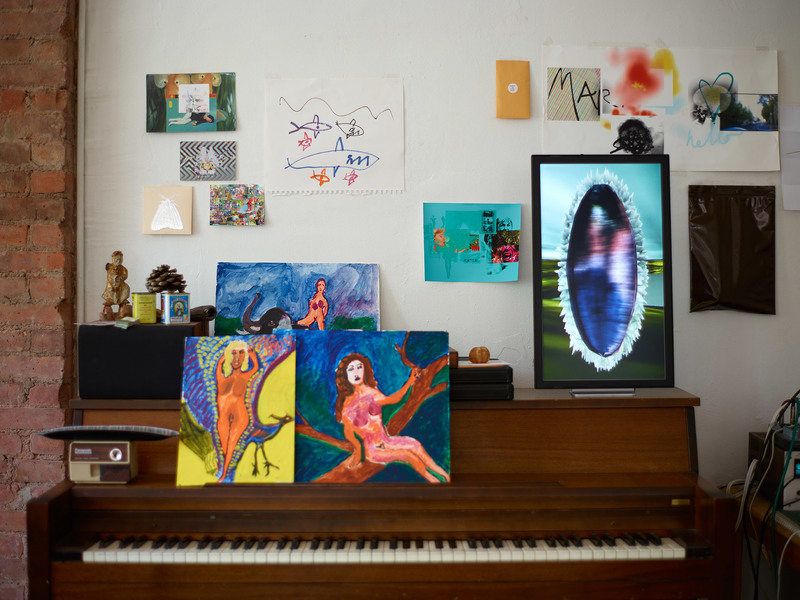 Where does digital art live? Today, it’s usually found on your computer. While networked practices, hacks, and coded mixed-media practices are supported through scattered exhibition spaces and sites like Rhizome, digital art—art made using digital tools (think gifs), including digital photography, created to be viewed on a screen—hasn’t found much of a home away from your computer screen. Until now.

Last year, in New York, a small start up raised hundreds of thousands of dollars over their modest Kickstarter goal to create a programmed, framed, screen to display digital art in the home. Backed by a team of programmers, developers, and one established curator, Electric Objects launched with the mission of untrapping “beautiful objects”[1] from our TVs, phones, and computers, where they get lost amongst the distraction of noises and alerts. For around $500, one can own the E01 in either a black or white frame. Once hung on your wall, you can cast your own images, or works from the Electric Objects gallery, onto the screen. Designed solely as a way to view art, the EO1 displays one image at a time, which can be changed through an app that also contains ways to share and network with friends who also have the product.

Electric Objects is not alone in their efforts. San Francisco-based depict launched last year with a mission to build a dynamic app that would allow artwork to be cast to extant screens in your home through Chromecast and other similar services one might already have. However, this month they just announced they too are developing a framed screen for purchase, yet to be released. With a goal “to democratize access to art, and to connect people to what inspires them,” depict works directly with artists to create new works for their galleries that customers can “subscribe” to stream monthly, or purchase a digital copy (at around $15) for their personal collection to display anytime they’d like. 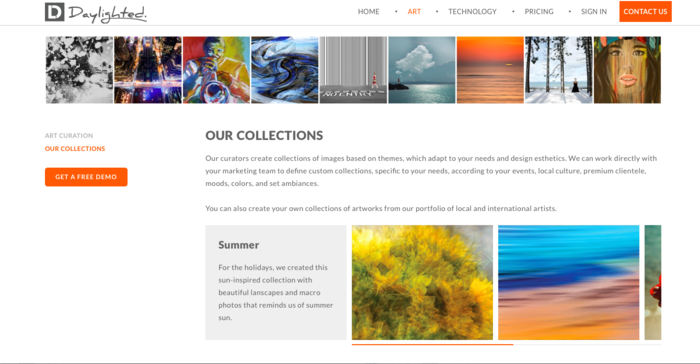 Also in San Francisco is the even more commercial Daylighted, a company that has developed a screen for businesses that will rotate digital images (at this time photographs only) from their galleries in clients' hotel lobbies or waiting rooms. With Daylighted, the screen also comes with a “label” to place to nearby so customers can learn more about the art and even purchase it. A copy will be sent to the customer’s home and the hotel/business will receive 15 percent commission on the sale—basically inviting hotels to get into the gallery business.

Certainly these initiatives offer new commissions and sales opportunities for artists. And, important to the digital realm, both depict and Electric Objects—much like digital editions platform Sedition—protect the work of the artists they commission by not allowing unique artworks to be downloaded (meaning works cannot be easily duplicated or pirated). Aside from Daylighted, which currently contains prosaic photographic collections such as “Summer” and “Romantic Paris,” Electric Objects and depict have hired curators who work directly with artists to create series for their platforms, most of whom work at least in some part with digital tools as a part of their practice.

A quick glance at depict’s featured artworks reveals a mixture of swirled paint-like motifs and photos of picturesque Iceland, but there is also more conceptual work by emerging artists. Andre Woolery worked with collaborator Victor Abijaoudi to make abstract painterly works created by capturing the oily remnants of fingerprints left on screens after playing Angry Birds or spending time on Facebook. Are they portraits of a human or of an app? Are they humanizing technology or playfully painting a picture of our love affair with our phones? Magnus Gjoen has created a dark, strange series juxtaposing images alluding to war, religion, and death with decorative arts—the kind you see in your local art museum. Electric Objects, too, has a mix of street and landscape photography, plus more abstract digital projects by emerging and established artists including Casey Reas (forthcoming) and Dina Kelberman.

Supporting digital artistic practices is as much about the screened product as it is about creating a context for the work. Much like galleries produce catalogues, Electric Objects has a sleek section of their website dedicated to hosting interviews with their artists and panel discussions about digital art (as does depict), and it has partnered with the New York Public Library to launch an artist-in-residence program where the selected candidate will mine the library’s map archives to create work for the platform. The first resident was San Francisco-based Jenny Odell who will be finishing up her residency at the beginning of next month. Electric Objects will also be participating in Hyperallergic’s Hypersalon in Miami during the art fairs this December.

It’s certainly worth paying attention to the companies and tools that are creating conversations around digital art and artists in new ways. While the face value of these products is the opportunity to view digitally made images, gifs, and animations away from the distraction of our internet browsers, what may prove more valuable from a broader perspective is the possibility of creating a new market system for distributing work and supporting art. Will these new platforms and systems be absorbed into the capitalist art world, compete with it, or offer new, unexpected—perhaps even democratic— alternatives?

While I don’t really support the concept of “paintings are too expensive so we want to create a startup and make a product that you have to buy to democratize art”[2] (especially when these products have a shelf life of about seven years), I do think that the cultural capital surrounding the products—the potential of institutional collaborations and the development of an infrastructure for supporting artistic practices—holds the potential for these products to not fall into the dusty depths of a cacophonous art world. What quantitative measures for creating collective objectives around digital art will come of these panel discussions and art fair participations? Ultimately, I’m most curious to find out just how far artists will be able to push the limitations of these platforms in meaningful ways.

[1] From Electric Object’s “home” page: “There’s more art on the Internet than in every gallery and museum on Earth. But many of these beautiful objects are trapped.”

[2] From depict’s “About” page: “None of us could afford to drop thousands of dollars on physical paintings, and we wanted everyone to have the opportunity to own something unique and beautiful.”