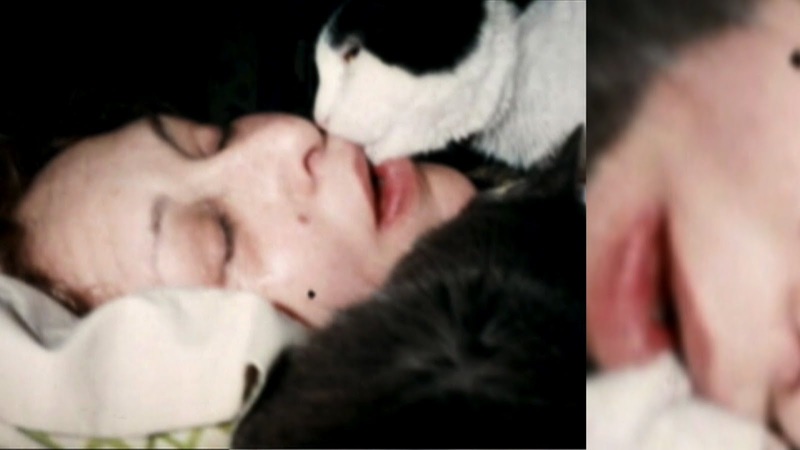 I am trying to organize my thoughts on Carolee Schneemann. It is its own performance rehearsal, this pacing around the apartment, trying to organize my thoughts. A recent exhibition provoked me at the Slought Foundation, Archives. If I had just a little more money, I would set up for myself, near home, a screening of works by Schneemann—the lion’s share of the works by the artist exhibited at Slought.

For my screening, on four walls, I would project two that are cat-themed: Mysteries of Pussies, 1998-2010, and Infinity Kisses, 2008. I would project the infamous Meat Joy, 1964-2010, and the—if possible—even more infamous, Fuses, 1964-1966. Gathering my thoughts in this flickering, I’d keep close Schneemann’s book, Imagining Her Erotics: Essays, Interviews, Projects (MIT Press, 2002), with a flashlight as my bookmark.

With great material cunning, Schneemann recognizes a sensory realm, makes visual demonstration of her pleasure, wants more pleasure wherever pleasure is codified. In her films, in record of her kinetic theater, and in writing—in her words and acts—I sense Schneemann wants to land big on truth, achieve a vast view of the heterosexual, achieve an encompassing panorama of woman/man/woman/man, pleasure and woman-centered pleasure, earth-shaking for a certain kind of public/private utopia.

We all know that we don’t want precisely what Schneemann wants. Schneemann’s uncoverings, Schneemann’s acceptance about merging with other bodies... this is not what all bodies want.

Schneemann will never be quaint hippie. To my eye, she is still hard-hitting enough, wow-enough, naked enough to be stick-it-to-’em, noxious to some audiences, I imagine.

Schneemann keeps Schneemann typically wet-on-wet, raw, joyful-expressionist, always tinged with a tie to the scar of the ever-fat-minded, the over-grogged Medieval. The Schneemann formal system, if there is one, is broad. It is dripping boulevards of advances, loud and ruptured, quieting only for losing the self to pleasure of dis-assembling what codes unwanted.

Padding through Schneemann’s Infinity Kisses and Fuses are cats. The cat is timeless. For Schneemann, cats are sacred. Schneemann quotes from her research; this passage she reads out in Mysteries of Pussies:

The torture of animals, especially cats, was a popular amusement throughout early modern Europe... To protect yourself from sorcery by cats there was one, classic remedy: maim it. Cut its tail, clip its ears, smash one of its legs, tear or burn its fur, and you would break its malevolent power.

from Robert Darton’s The Great Cat Massacre and Other Episodes in French Cultural History (Basic Books, 1984).

The opposite of public smashing and burning is kissing. An infinity of kisses, cat kisses, over an extended period yielding daily cat-kissing photographs, maybe tongues touching, mouth-to-mouth kisses with cat... Everyday, wet noses. Animals lick their owners. I think people are not supposed to touch tongues with animals... are they?

Schneemann knows the ravaging dangers of losing self to mystery and disorder, the dangers of merging with other bodies—tender, vulnerable in the unknown. It could be dangerous to be tender in public. The unknown too can be dangerous. Schneemann identifies with the cat, at turns tender and mysterious.

Schneemann loves her cat every morning, gives and receives kisses maybe right before or a little bit after slopping out chicken or pork morsels onto something like a delicate cat-faced plate. Scratching behind the ears leads to the cat kneading, cat starts kneading cat paws. Snap picture.

What is pleasure? Pleasure is tincture of discovered precision, ground-out space. Pleasure is good, so sincere and not having a bad time either—beach love, not too-soiled sheets.

Pleasure is stained glass of leaf reflections, particles through, both pale sapphire, both aqua, being brushed blank, being here in the pews with patinas evaporating on your chin, on your forehead, on your belly. Two of us would be equal. Two of us would have open doors.

Carolee Schneemann is nude—a nude merging with a cat, nude ecstatic, just short of vulgar, self exposed, naked, a woman naked and merging with her male lover, cat-like. In these films, Schneemann builds by accumulating bits of images of actions. Schneemann composes with loose and bold strokes, bright color, personal pleasure performed. This body is sincere, passionate. This body does not want to be exaggerated, naive; this body wants to be tender to what is tender, unruly but somewhere accepted.