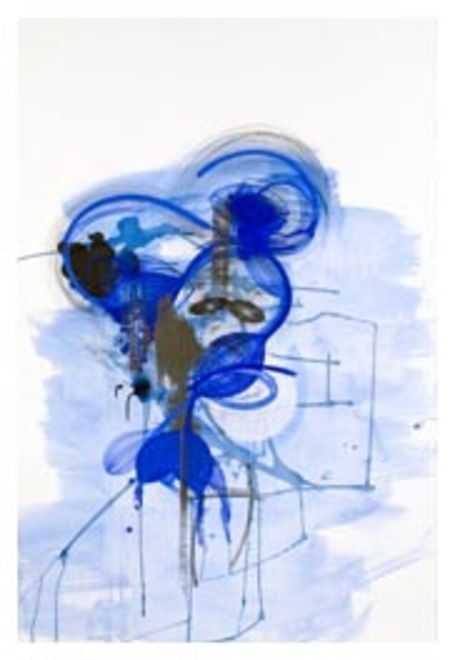 Yvonne Estrada crafts images in the spirit of improvisation. She creates abstractions that allude to the natural world through forms that suggest a leaf, or imply a flower bud or bulbous seed casing. She prefers to construct images from memory instead of using source material like photograghs, indicating a fondness for the imaginative and dream-like over the representational real. In “Blue,” her second solo exhibition at Von Lintel, Estrada’s singular focus shifts to the color blue in hues ranging from cobalt, ultramarine, and cerulean to indigo, azure, and turquoise. Her characteristic style of precise mark making and whimsical gesture coupled with organic shapes, patterns and forms is rooted in self-imposed restriction although she adds subtle augmentations like the metallic-violet undertones of ballpoint pen ink, smatterings of silvery graphite, and splashes of sunny yellow.

Eight of the twelve works on paper (all 2011) are large in scale (at least five feet tall) yet convey an intimacy through their otherworldliness and stylized, gestural marks. Estrada channels the spirits of Sol LeWitt and Isamu Noguchi in her pursuit of expressiveness through a kind of aesthetic ease. Line and space receive equal attention alongside the color blue to produce compositions that mimic the precision of architectural plan drawings. Through her use of brushes to make painstakingly rendered lines (she sparingly used pens and pencils) and the utilization of the paper’s white space as a neutral ground on which to anchor the images, Estrada highlights the range of expression that can be achieved with limited means, resulting in drawings that have a fluid, lyrical, and nearly amorphous appearance from a distance, but gain a density and depth that is revealed upon closer inspection.

Estrada’s use of the viscous and fast-drying medium of gouache compliments rather than belies the lithe grace of watercolor pigment, which gives her drawings an affinity with collage. Fine lines skillfully rendered with brushes allow her to build layers of color on the paper, imparting the gouache with a hearty texture that stand in contrast to dissipating graphite lines that form bands in some of the pieces and create shiny, pigment-rich forms on others. Broad brushstrokes of blue-grey or turquoise watercolor pigments form the background for some images while creating fragments that recall the imprinted pattern of cloth on others. Using nature as inspiration and understated source, Estrada creates a fantastic and exhilarating world through meditations on the beauty of simplicity. 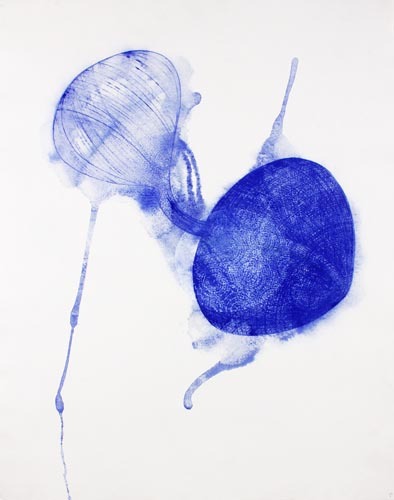 Posted by Lee Ann Norman on 1/23/12
RELATED ARTICLES
COMMENTS (0)
ArtSlant has shutdown. The website is currently running in a view-only mode to allow archiving of the content.